by Inês Grosso and Rosa Lleó

2020 has been marked by instability and uncertainty. The extraordinary impact of the pandemic on the cultural sector has forced us to rethink our practices and methodologies, as well as the role of museums in a pluralistic society. The rift opened in the last few months has emphasised our political, social and ideological divisions. We live in a fragmented, exclusionary planet, and it is becoming increasingly important and necessary to engage in dialogue.

The word “confinement”, in its sense of being enclosed, locked up, restricted, entered our lexicon. Whilst temporarily barred from the public space and our lives as a community, the confined, limited setting of our home became a world unto itself where everything happened at a different pace. We were trapped in this restricted space for months, a space which was organised into compartments and partitions. We lived enclosed between walls.

The exhibition Um oásis ao entardecer [An oasis at sunset] — a commemorative overview of the EDP Foundation awards’s last twenty years — is also a reaction to the current state of affairs.

In geographical terms, an oasis is a fertile area, an island offering water and vegetation in the middle of a desert. It is also a place of hope where we can rest, a temporary refuge for travellers on their arduous journey. Within this place for renewal and transformation one finds the idea of a fragile paradise, hemmed in by a hellish vastness. Invoking art as a place of freedom and resistance, the title also alludes, in its apocalyptic lyricism, to the confinement and social isolation quandary we found ourselves in when the exhibition began to be devised. As days blurred into nights, the reddening sky of dusk rapidly gave way to a fresh dawn, we experienced a new world order, oblivious to the cyclical nature of time. Between our four walls, we forged relationships and debated ideas mediated by a computer screen with a group of people spread over all over the world — in Portugal, Brazil, the Netherlands, Spain, Germany, the United States, Australia, and Sweden. By the end, rather than simply proposing a chronological survey of the history of the awards, or a thorough journey through Portuguese contemporary art over the last sixty years, the curatorial project took a more experimental and informal direction, challenging and deconstructing hierarchies and taking on board the sheer, unique variety of such a diverse, teeming group of artists.

An award is a token of public recognition offered to someone for the excellence of their work, their practice or some individual quality they possess. To counter the idea of competitiveness or exceptionalism which an award may imply, we rather held a collective celebration, a tribute to all prizewinning artists, here presented in a sequence of flowing, continuous spaces. It is an open, non-linear, multifaceted narrative, offering unexpected (in)sights, while also allowing the visitor to explore multiple points of convergence and interrelation between the works and artists. Built from prefabricated or modular materials deliberately left exposed for all to see, the architecture unifies and sorts the various spaces, while indulging the Romantic notion of a lost ruin we stumble upon in the midst of nature; scattered debris evoking an aesthetics of fragmentation in a topsy-turvy world — our reality reflected back to front at us. Making use of existing work and new commissions — some through processes of contamination, dialogue, exchange and referencing between artists — this exhibition brings together for the first time the winning artists from all editions of the EDP Foundation New Artists Award and the Art Grand Prize and represents an experimental integration of visual and conceptual dialogues, never-before-seen interchanges embracing different generations and media, hierarchical and chronological relationships engendering poetic meanderings, disruptions and reciprocal fusions.

If we look back at this year, we rest reassured of the surprising resilience of artists, their ability to nimbly and efficiently deal with the difficulties and challenges imposed by the emergence of new realities. Conceived and planned under absolutely exceptional circumstances, this exhibition is ample proof and witness to this phenomenon. Um oásis ao entardecer looks to the future, directing its attention to the challenges that await us in a world we know has been transformed for ever. This is a moment for celebration, but also for reflection: a hopeful, encouraging message expressed in the will to pay homage to those artists who, over twenty years and with great effort and determination, have made possible the success and recognition of two of the most prestigious national art prizes, on which EDP Foundation’s framework and cultural mission have been built.

Pompeii of Structures
by Diogo Passarinho Studio
"... the visitors are presented with a scattered layout, allowing a fictitious sense of freedom and control..."

Ghosts don't have shadows, but foxes do
An interview with André Romão
In the setting of "an oasis at sunset"

Pompeii of Structures (in perspective)

by Diogo Passarinho Studio. An oasis at sunset
#commoning
Graphic Standards Manual
by ATLAS Projectos
“… from analogue to digital and back.” 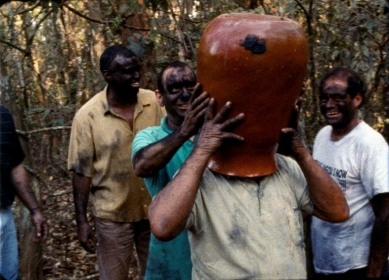