The environmental imagination of the turn of the millennium found itself confronted with a radically expanded, networked world. A hyperconnected, mobile, cosmopolitan way of life had conquered cultures and societies from disparate corners of industrialised nations, the experience of reality ebbing and flowing along taxonomies of “local” and “global” becoming confusingly intertwined. Fredric Jameson, theorist of postmodernism, called this “alarming disjunction point between the body and the built environment” symbolic of the “incapacity of our minds to map the greater global multinational and decentred communicational network we are caught in”. The emergence of a new world society aided by technological advancements like computer networks (the World Wide Web, 1989) also brought into stark relief enduring inequalities across the continental divides of North and South, as neoliberal practices of corporate exploitation from Arctic drilling to Amazonian deforestation, predicated on the commodification of nature at the service of capital, perpetuated injustices at the expense of formerly colonised, indigenous populations and disenfranchised communities inhabiting lands home to the world’s largest natural reserves and energy supplies.

The political ecology that came into formation during the 1990s and 2000s saw deep ecology’s ecocentrism less as part of the solution to environmental problems and more as a discourse that reproduced untenable society/nature dualisms, holding up idealisations of natural environments as spectacles for contemplation. Compared to those of preceding decades, the environmental artistic reparations of the 1990s became more deeply imbricated with community-oriented, socially engaged practices of collaboration, and the “relational aesthetics” (Nicolas Bourriaud) of projects designed around the activation of context-specific cooperative situations voted to rebuilding trust and mutuality in broken urban and social landscapes outside the institutionally sanctioned systems of art distribution.

While the new politics of sustainability encompassed growing intergovernmental action demonstrated by initiatives like the Rio Earth Summit (1992), the first United Nation Climate Change Conference (1995) and the drafting of the Kyoto Protocol (1997), among others, it also revealed patterns of political rationalisation and the ineffectiveness of transnational negotiations that swapped binding policymaking with the utilitarianism of a “green economy” – carbon trading, green certifications, renewable energies, eco-conscious shopping.

By the 2000s the concept of “climate justice” entered mainstream discourse and galvanised growing civic and non-governmental action on a global expanse, calling for the accountability of corporate interests controlling geopolitical crises and humanitarian wars that exacerbate the vulnerability of already underserved social and economic groups. It is in the same years that Dutch chemist and Nobel Laureate Paul J. Crutzen popularises the term Anthropocene, i.e., the Era of Man, scientifically equalising the effect of humanity’s quest for survival to an irretractable Earth-altering geological phenomenon. The enduringly life-threatening effects of anthropogenic climate change became incontrovertibly intertwined with an augmented paradigm of existence that looked beyond man itself and towards a construct of “planetarity” (Gayatri Spivak) embracing human and non-human life and supporting modes of collective identification that do not radicalise “difference” – biological, ethnic, gendered – but engender a transformative and relational vision of ecosystems in the larger web of life.

The ecological practices of the 1990s produced artistic forms of interventionism that more intently sought for the establishment of site-responsive collaborative enterprises among communities and stakeholders. This also involved the deployment of scientific knowledge and technological innovations in reparatory explorations that aimed at countering the ostensible effects of climate change on the livelihood of entire populations at various degrees – from soil and water contaminations due to toxic waste disposal, intensive agriculture and oil spills, to extreme weather events like hurricanes, droughts and floods, of which works by Viet Ngo, Mel Chin, Superflex, Betsy Damon and Marjetica Potrč are some examples. These undertakings also brought forward evidence of the disadvantaged living conditions of people in areas of the world that were impoverished by technocratic inefficacy and rampant market deregulation.

Many of the inventive ecological strategies* of this period appeared as self-organised, context-oriented endeavours encompassing field research, alternative pedagogies and cultural programming engaging multidisciplinary forms of territorial knowledge drawing upon intersectional histories of place spanning material, technological and sociological narratives. Aimed at generating new modes of public engagement in the urban realm of then considered world peripheries and tending to the creation of novel notions of social solidarity, collaboration and publicness, examples of these still ongoing initiatives are Sarai, in India, Rural Studio and The Centre for Land Use Interpretation, in the United States, Stalker, in Italy, and Urban-Think Tank, in Venezuela.

* Ecovention (ecological + invention) is a term originally coined by curator Sue Spaid for her eponymous 1999 exhibition but is used here to cover a wider spectrum of eco-critical projects than those presented in the show.

The term “ecology” was first used in 1873 by the German zoologist Ernst Haeckel to indicate “the study of the relationships between living organisms, including humans, and their physical environment” – a principle that has over decades been subject to ever widening interpretations debunking not only the intellectual limitations of human-centred exceptionalism, but opening inquiries into the very nature of reality, existence and what it means to be human. Among the humanities, the then emergent field of ecocriticism, for example, looked at how literary production became too infatuated with environmental subjects and with deconstructing paradigms of human-centred agency by looking at nature and landscape no longer as framing devices but as active categories of analysis.

For post-human and post-natural ecological narratives, acknowledging the idea of the planetary means abandoning a monolithic Nature and embracing instead the position that “natures’’ are brought into being as the outcomes of simultaneous articulations between multiple human, technological and natural agents – a reflexive position of the ecological that embraces our fragmented, cyborg selves and the multiple natures we routinely interact with.

Bringing the very dichotomy between ecology and culture into question, it is no longer possible to write the histories of globalisation, capital, and culture without also taking into account the history of the species – including animals, plants and bacteria. It is in 2008 that Ecuador becomes the first country to inscribe in its constitution The Rights of Nature to “maintain and regenerate its cycles, structure, functions and evolutionary processes”, with humans having the legal responsibility to enforce these rights on behalf of ecosystems.

Artistic projects working with these subjects range from the staging of artificial life via digital and hardware-based configurations or the symbiosis of different organic materials, microorganisms and bacteria, simulating livings systems, as well as critically looking at the warring potential of unchecked biotechnological control.

The number of artistic and curatorial initiatives, editorial projects and academic investigations that have voted attention to the political, social and economic forces deeply embedded in environmental degradation and climate histories of human rights violation and corporate manipulation has grown exponentially since the early 2000s. Ecology and equity have been central to the activism of multiplying non-governmental organisations advocating for legislative measures protecting the populations most affected by natural habitats’ dilapidation at the hand of industrial extractivism like oil drilling, rare-earth mining, deforestation, hydro-power infrastructure constructions, deep sea trawling and fracking. The world’s first-ever Climate Justice Summit – when the term was first used – happened in 2000 at the same time as the COP 6 negotiations in The Hague, but the perils and tragedies of the climate crisis had already been voiced by groups like the Alliance of Small Island States (established in 1990), endangered by rising sea levels, ocean warming and coastal erosion; the ill-fated Movement for the Survival of the Ogoni People in Nigeria (1991–1995); the Amazon Conservation Association (1999); or the Climate Action Network (1989), which is today the world’s largest, made up of over 1,500 civil society organisations in over 130 countries.

The popularisation of the Anthropocene concept in the early 2000s that brought scientific individuation to the massive man-made alteration of the planet has continued to energise ecocritical literature from independent journalism to academic and critical writing spanning various geographical and political vantage points, particularly focusing on histories and stories from indigenous populations in the Arctic zone, the Niger Delta in Africa, the South American Amazon, Mexico, India and South East Asia, where environmental damage has most starkly revealed its colonial roots and engendered the mass-displacement of people from their own lands.

Visual Natures (maat, 30/03 – 05/09/2022) is the product of more than two years of critical investigations around climate science, creative practices and eco-politics. A continuation of the data-driven installation Earth Bits – Sensing the Planetary and the public programme Climate Emergency > Emergence, both conceived and ignited by Beatrice Leanza during her directorship of the museum, the project surveys political, social and cultural forms of collective agency from the 1950s onwards that demonstrate how our understanding of “nature” informs the ways in which we organise, sustain and govern our communities as an expanding planetary construct, in concept and in practice. 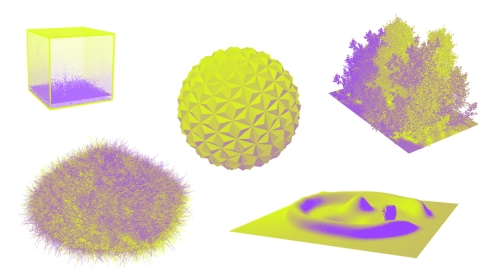