An envelope generator with four stages: Attack, Decay, Sustain, and Release. When this envelope generator receives a gate input, it typically starts at 0 volts (which is the equivalent of silence when connected to a Voltage Controlled Amplifier, or the lowest frequency when connected to a voltage controlled filter or oscillator) and raises to the maximum voltage it can output (typically 5 to 10 volts depending on system; it can often be set with an output level control) over a time set by the Attack control. Once it reaches that level, the output voltage immediately starts dropping to speed set by the Decay control it until it reaches the voltage set by the Sustain control. If the input gate is still active, this level is maintained until the gate goes back to 0 volts (usually because you released the key on a controlling keyboard, etc.). At that time, the output voltage then starts dropping back to 0 volts at the rate set by the Release control. Click for more about variations in ADSR behaviors.

A bandpass filter (BPF) leaves the harmonics around the center, corner or cutoff frequency untouched, and attenuates those above and below the center frequency. The further away you get from the center, the more they are attenuated, based on the number of poles in the filter, with each pole equalling 6 decibels of attenuation for each octave you get away from that center.

BPM (beats per minute) is the most common way of stating tempo: How many beats (typically, quarter notes) should be counted every minute. A tempo of 120 beats per minute means there would be two beats every second (120 beats/minute x 1 minute/60 seconds = 2).

Eurorack is arguably the most popular format of modular synthesizer today, with over 100 manufacturers and over 1000 modules available. It was created by Doepfer Musikelektronik in 1995, basing its size off the Eurorack format for lab equipment. Some users will try to tell you that Eurorack doesn’t “sound” as good as other formats, but that’s just based on a few substandard manufacturers or modules; there’s nothing inherent to the standard that makes a huge difference in the final sound (no; the difference between 12 and 15 volt power supplies is not enough to most ears)

This is one of the main signal types that are passed around inside a modular synthesizer. It jumps to high level – typically 5 volts – when a new note is supposed to start (such as when you press a key on a keyboard controller), or when a sequencer jumps to the next “stage” or note. A gate typically stays at that level for the duration of the note (i.e. while the key is being held down), and suddenly drops or “goes low” to its resting level – typically 0 volts, but sometimes –5 volts or another number – when the note ends (i.e. when the key is released). In practice, when a gate signal is sent to a typical envelope generator, the start of the gate (when it “goes high”) tells the envelope to go through its Attack and Decay stages; while the gate remains high, the envelope stays at its Sustain level, and when the gate goes low again, the envelope moves onto its Release stage.

Granular synthesis can be thought of as particle theory applied to sound. The concept is that a sound can be broken down into very small “grains” – typically 1-50 or 100 msec in duration. These tiny snippets are then played back to reproduce the original sound, or to create new sounds by changing the speed, pitch, volume, playback order, and direction of the individual grains. You can crossfade between these modified grains, or layer more grains on top. The result can range from audio processing tricks such as changing speed without changing pitch and vice versa, to creating psychedelic “clouds” of sound (and indeed, there is a popular module called Clouds). Click through for links to a few articles on implementing granular synthesis.

That hole you plug your patch cables into on the face of your synthesizer modules? That’s called a jack. The size and type of jack – 3.5mm, banana, or 1/4” – often is one of the defining features of different synth module formats: 3U/Eurorack, 4U, and 5U/MU respectively. (No, a plug is not called a Jill. Actually, it’s the other way around: A plug is sometimes referred to as a male connector, and a jack is referred to as a female connector.)

The LFO (Low Frequency Oscillator) module produces repetitive, cycling waves ranging in frequency from the low end of the audio spectrum to as slow as many seconds or even minutes per cycle. They are used to produce effects such as tremolo (when controlling the loudness of a signal), vibrato (when controlling the pitch of a signal), repetitive filter wah-wah effects, pulse width modulation to vary the waveshape of a pulse in an oscillator, and more.

The M3 is a common screw thread size used to mount Eurorack modules. This size is most common when using module mounting rails that have been pre-drilled.

A modular synth breaks down the main components of a synthesizer – the tone-generating oscillators, the tone-modifying filters, the amplitude-shaping VCAs, and the modulation sources that create envelopes, tremolos, and more – into individual modules you can purchase and install. At the most basic level, this allows you to play mix-and-match in building your own custom synth. Click through for more reasons to go modular.

The cables used to connect together the different inputs and outputs in a modular synthesizer, carrying electrical control voltages and audio. The term patch cable came from the old telephone patch boards where an operator had to physically connect two callers together using electrical cables. As different modular formats often use different connector standards, you need to make sure the connectors at the ends of the wire in a patch cord are the size you need (3.5mm for Eurorack, 1/4” for 5U/Moog Unit, or banana for Serge or Buchla control voltages).

Rack-mounted equipment usually follows a standard set of dimensions, including 19” (48.3 cm) for width, and a “rack unit” (or U for short) for height equaling 1.75” (4.4 cm) per U. Many common modular synthesizer formats follow the rack unit system for standardizing module height – such as 3U (3 x 1.75 = 5.25” or 13.3 cm) for Eurorack, 4U for Buchla and Serge, and 5U for classic modular Moogs (sometimes referred to as MU for Moog Unit).

Most voltages moving around inside a modular synth are very purposeful in their variations: the repeating waveforms of an audio rate or low frequency oscillator; the rising then falling voltages of an envelope generator. However, it can also be useful to have randomly wandering voltages to create everything from subtle variations in pitch to wildly varying volumes or filterings. Noise is an example of an audio-rate random signal.

Short for reverberation. This is an effect device that mimics being in a room where you can hear the original sound reflect off the walls multiple times, bouncing around in a wash of sound until it eventually decays into silence. A reverb can greatly enhance the sound of a synthesizer, adding lushness and dimension to what might otherwise be a stark sound. There are relatively few modules that implement a reverb effect, and even fewer that allow you to voltage control some of its parameters (the ErbeVerb being the most famous); many just use an external reverb effect.

This is a specification of digital audio: How fast the individual measurements (samples) that reconstruct a sound are recorded or played back. The bandwidth of that audio file (which corresponds to the highest frequency that can be reproduced) is in practice a bit less than half of the sample rate. Click through for some details on the implications of this.

The most common type of sequencer you’re going to see in a modular synth contains a row of knobs (also known as steps or stages) that may each be set to output a different voltage. A sequencer then goes through steps one at a time. This is most often used to create repetitive musical lines where each note has the same duration, which is popular in trance-like forms of music as well as the classic Berlin School style (70s-era Tangerine Dream and Klaus Schulze; current Red Shift and Node). Click through for features to be aware of in a sequencer.

A trigger is a very short electrical pulse signal, rising from 0 volts to a standard level such as 5 or 10 volts for a few milliseconds before falling back to 0 volts. It is often used to start or “trigger” the playback of a percussion sound, including starting an envelope generator. They can also be used to pass clock signals around a synth so connected modules all know when a note (or finer subdivision of a note) starts. A trigger usually has a fixed duration, compared to a gate signal which also rises from 0 volts to a higher voltage and falls back to zero again, but which stays “high” a variable length of time depending on the length of a note.

A Voltage Controlled Amplifier (VCA) controls the amplitude of a signal passing through it by scaling or attenuating it in response to a separate control voltage input. It is most commonly used as the last stage in a patch, articulating when we can hear or not hear a sound the synthesizer is producing. Click through for more details and uses.

All texts from the Learning Modular website kept in their original form. 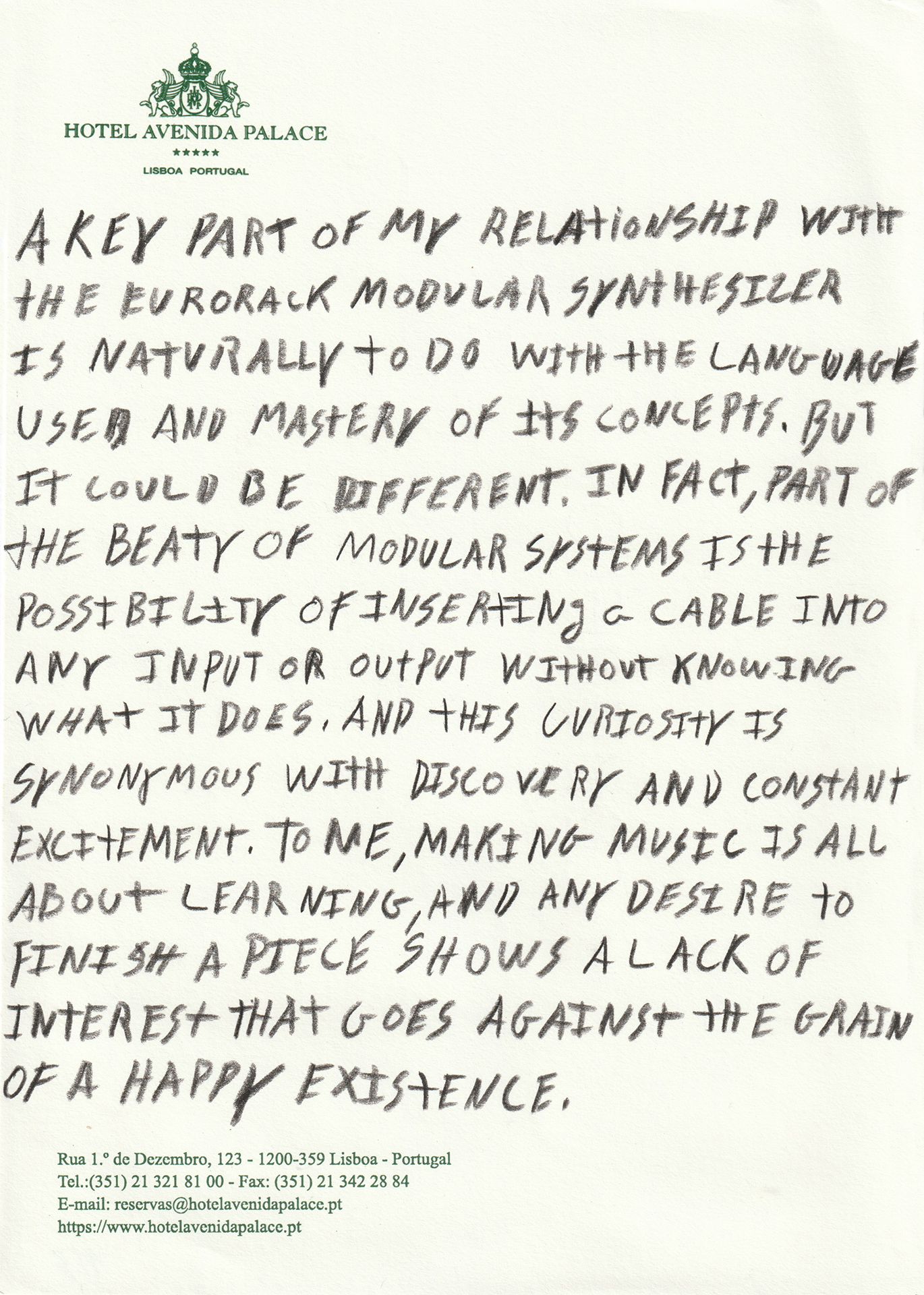 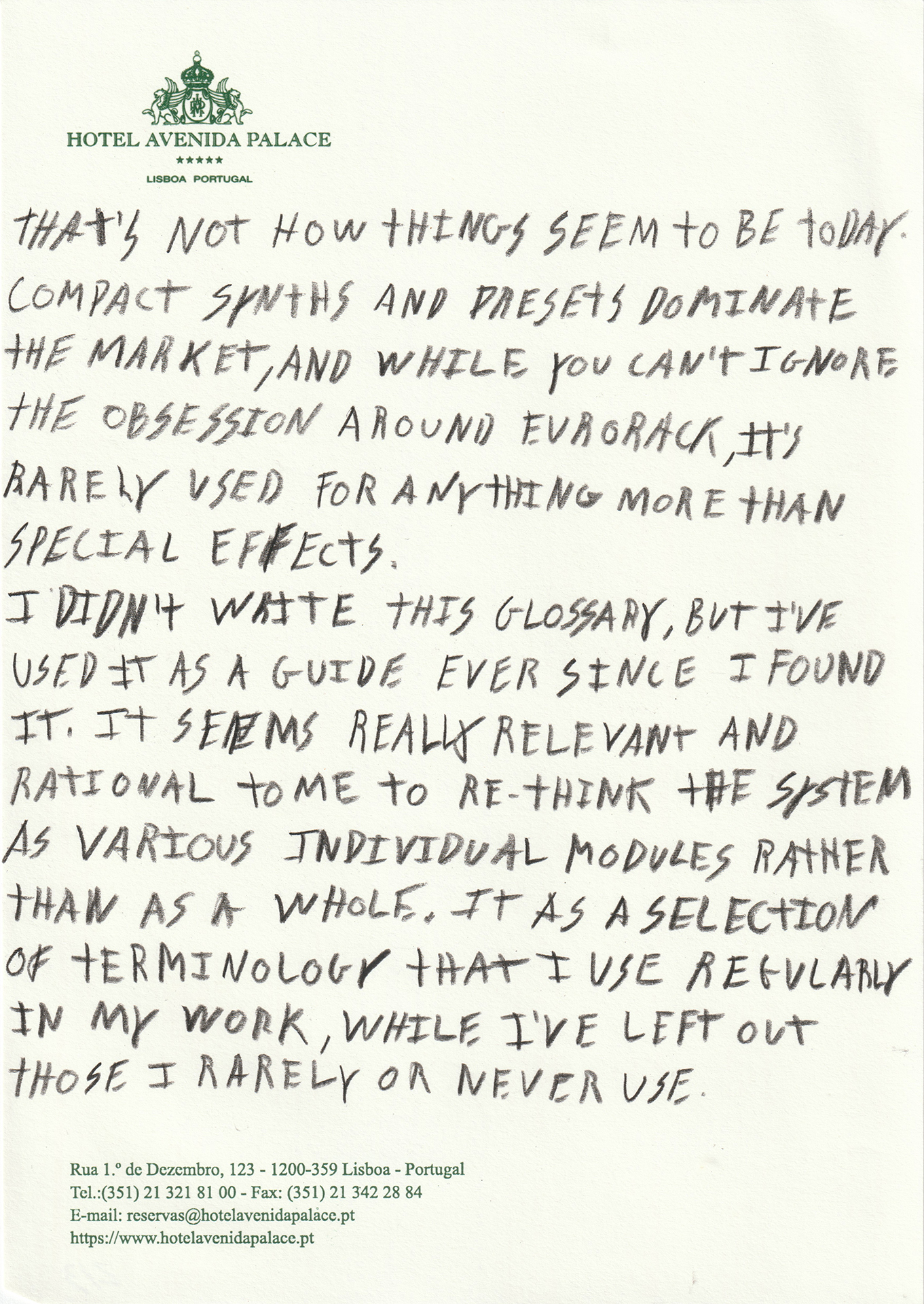 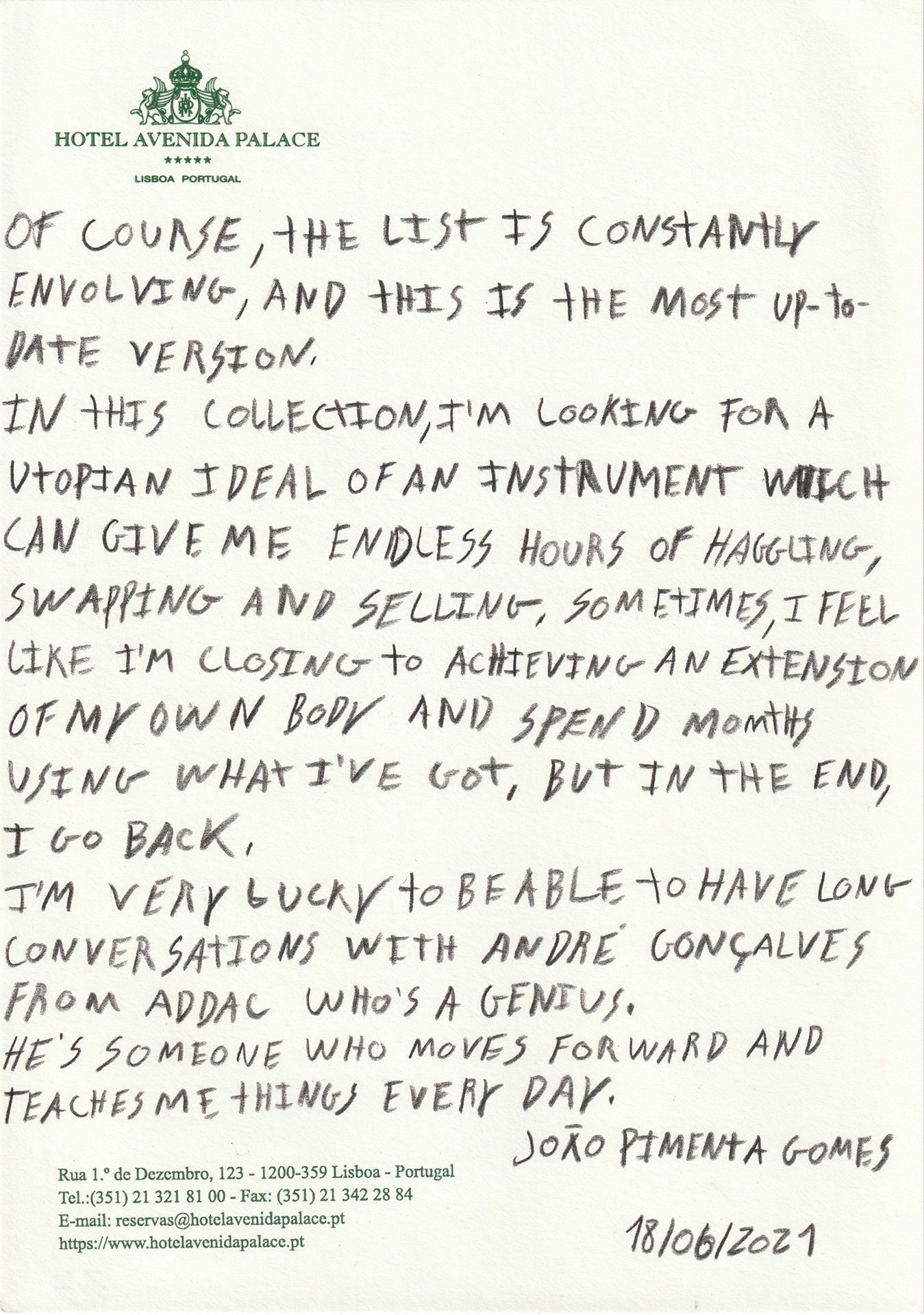 Handwritten introduction by João Pimenta Gomes. Courtesy of the artist. 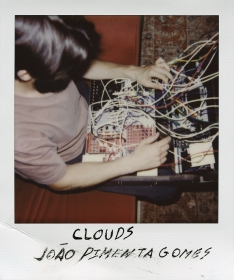