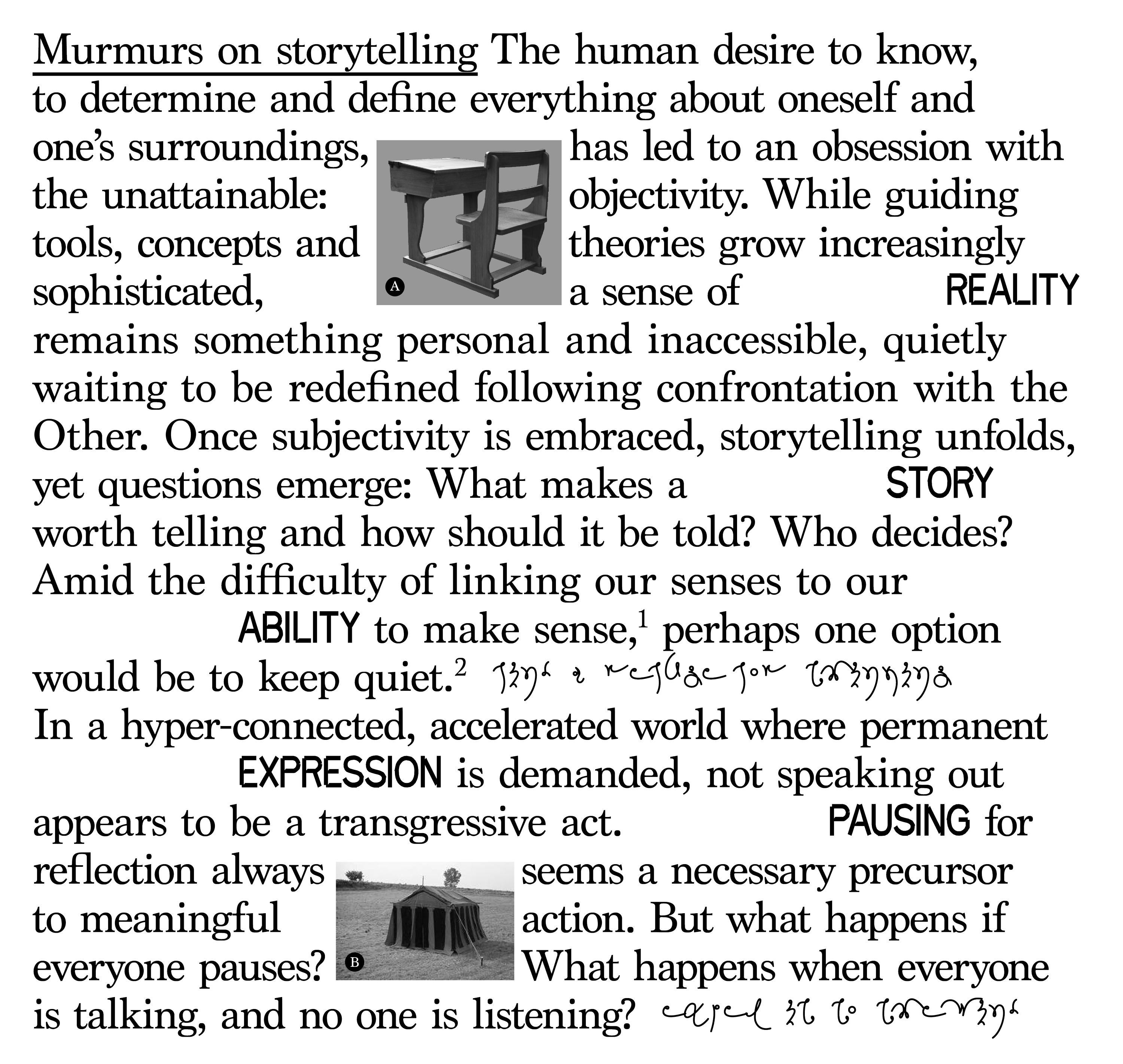 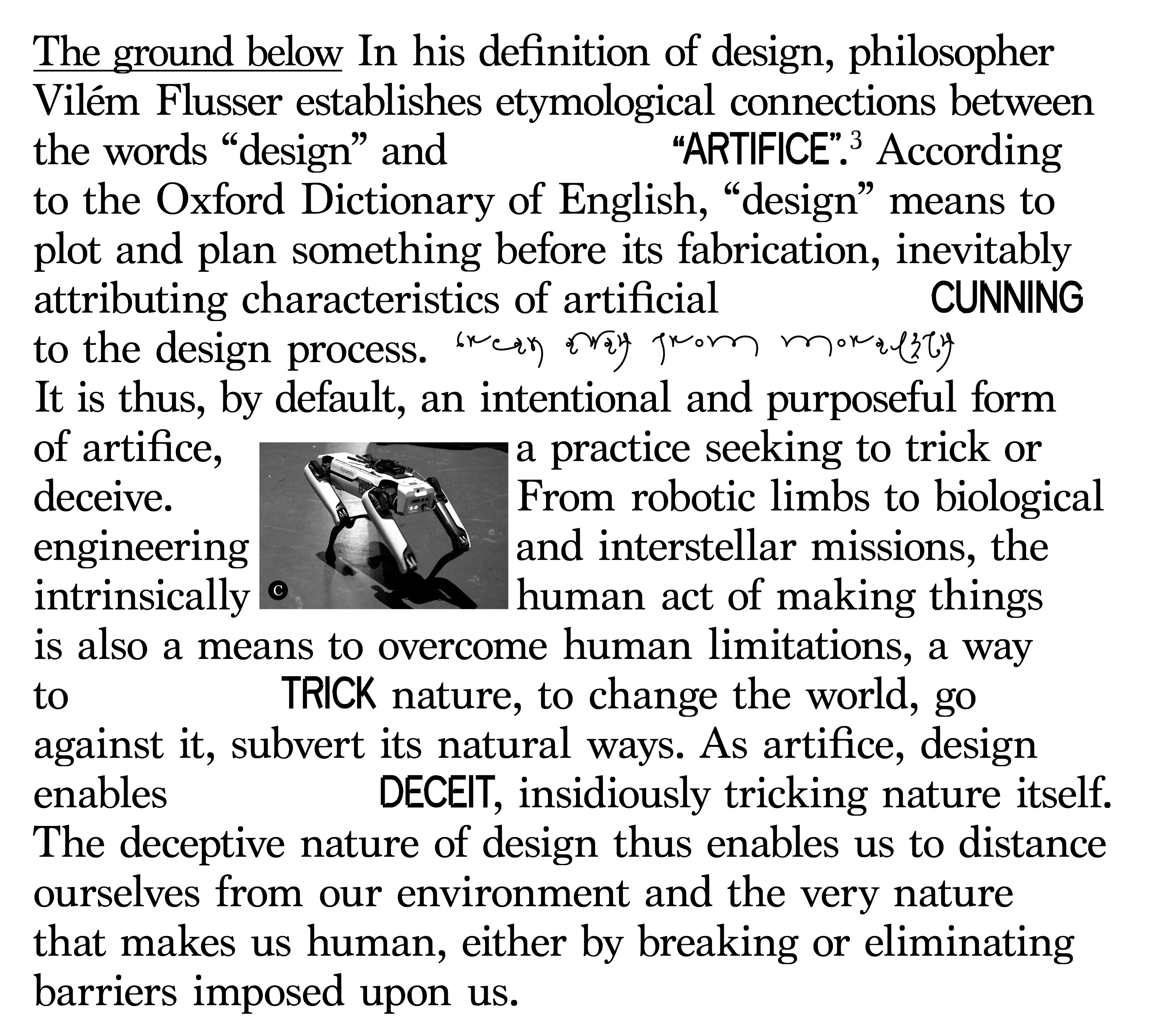 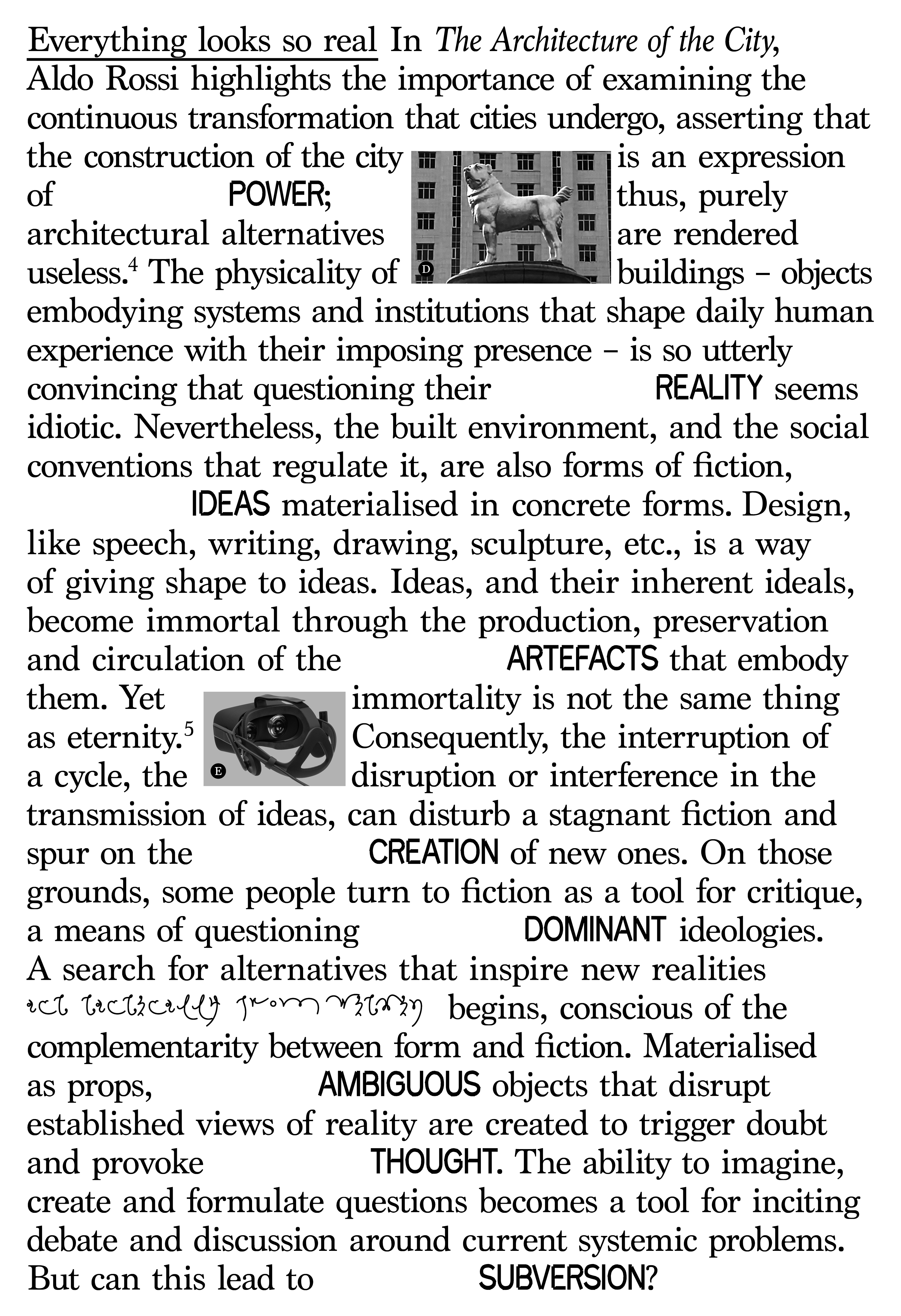 EXTENDED MARGINALIA ON DESIGN AND FICTION

Fake news and fictions with an uncertain political agenda seem to proliferate in the current context of extreme connectivity. Speech and opinion are banalised, while thought and critique are dismissed. As we are bombarded with all kinds of information, reality becomes infiltrated by doubt. We may be tempted to think that the production and propagation of fake news is a recent phenomenon, resulting from the demoralisation of the current generation. However, a closer look shows us that what is in fact new is the relentless competition between established news broadcasters, like television, radio and newspapers, and the plurality of voices enabled by the Internet. Whether we like it or not, Social Media has given ordinary people a chance to contest the monopoly of truth claimed by more established voices – yet this is as potent as it is dangerous LEARN TO MASTER IT. Can personal, alternative stories subvert dominant ones?

The term “fake news” implicitly suggests the existence of “true or real news”. Thus, its usage might lead us to succumb to the tendency to forget that all humans perceive the world with different eyes, through which various truths are devised and realities constructed. Based on an in-depth analysis of the role of fiction in design, while suspiciously evoking ventriloquism, Alexandra Midal advocates an exploration of the ambiguity between the two, encouraging us to play with subjectivity and storytelling, and to dive into the beauty of the lies of fiction. Presenting design as an activity that is deceptive by nature, while expanding on the stories that shaped its history, Midal explores the not-so-recent role of fiction in design – in all its travesties and trickery, and with a rich plethora of references and evocations such as the dummy, the ventriloquist, and the MacGuffin. Inspired by this vision, we propose a fragmented and augmented version of Midal’s narrative by picking up clues and constructing associations in the form of loose ends, new knots and parallels. Maybe this exercise in subjectivity will prove helpful, or perhaps it is just a way of re-inscribing our own biases in the narrative… Time will tell.

Extended Marginalia on Design and Fiction is an excerpt of a piece for The Daily Post-Truth newspaper by students of the master's degree in Communication Design at FBAUL (Beatriz Pinta and Madalena Lopes), based on Alexandra Midal’s lecture "Design is Fiction" that was presented in the context of the joint project between the Department of Communication Design of the Faculty of Fine Arts of the University of Lisbon (FBAUL) and maat.

for Gary Kasparov
#thetruth
#glossary
What is the truth?

by Friedrich Nietzsche
#thetruth
#glossary
To thine own self be true 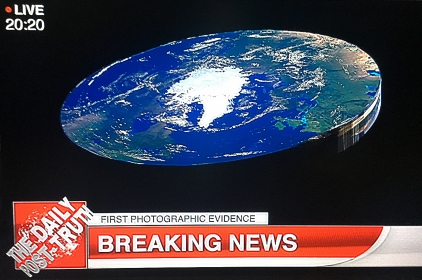