From “House of Dust” to “Aggregate Habitat”

“For artists looking to restructure perception and the process/product relationship of art, information and systems replaced traditional formal concerns of composition, colour, technique, and physical presence. Systems were laid over life the way a rectangular format is laid over the seen in paintings, for focus.”(→ 1)

“In 1973, art critic Lucy Lippard chronicled an emerging tendency in the body of work in what is now commonly called Conceptual Art. Citing the works of Sol LeWitt, Donald Judd and Robert Rauschenberg as well as the processes of Finish Fetish sculpture, Light and Space art, Anti-Form and Anti-Photography among many others, Lippard presented an alternative to art’s formalised preoccupations with composition, colour, technique, and physical presence. Instead, she advanced dematerialisation as the central, albeit somewhat ambiguous, analytical focus to understand the sweeping conceptual transformations driving avant-garde artistic practices in the 1960s and ‘70s. Through an extensive bibliographic chronology citing texts, documents, and works of art, Lippard suggested a radical re-reading of the art object through the lens of dematerialisation, drawing new aesthetic boundaries in which the concept was paramount, and the material form served as only a “secondary, lightweight, ephemeral, cheap, or unpretentious” means of communicating the artistic idea. The framework of dematerialisation tested the limits of the discourse around the art object, not only assessing the capacity to deflect attention away from objects and towards portable concepts, but also suggesting a methodology to more generally detach matter and information – a critical step in setting the stage for conceptualising art practices that would begin to explore new directions with the aid of rapidly proliferating technologies like computers in the coming decades.

One of the many artists working in this vein at this time was the poet, sculptor, and performance artist Alison Knowles, a colleague of James Tenney, a musical composer and computer programmer working within the environments of, surprisingly, both the acoustic engineering division of Bell Laboratories and the ever-changing interdisciplinary artistic constellation known as Fluxus. Though often working in different genres, both Knowles and Tenney developed an experimental body of work centered on themes of indeterminacy, aleatoric process and chance operation. A series of workshops hosted by Tenney in 1967 would introduce Knowles (alongside several composer and other members of Fluxus) to the creative possibilities of algorithms and computers; afterward the pair would go on to collaboratively author the project House of Dust, a very early, if not the first, example of computer-aided, parametrically-arranged poetry. Compiled in FORTRAN on a Siemens computer, the poem creates stanzas stochastically by iteratively selecting word phrases from pre-prepared lists that describe architectural attributes of a house in four categories (materials, location, lighting, and occupants). Exploring the potential of formal and aesthetic variability within a fixed syntax and structure, each instance of the poem started with the line, “A House Of...”, and was completed by random permutations of lines of text, each with unexpected variations in voice, tone, imagery, and symbolism. As a result of the computer’s compositional process, the project established no fixed length or form of the poem; one might interpret instead an ongoing epistolary and poetic dialogue between the computer and the artists. In the following years, an experimental architectural installation of the same name was staged at the California Institute of the Arts campus. It translated one output of the computer-generated poem – just four lines when printed – into a series of rough, earthy, non-Euclidean parabolic shell structures, houses of dust, fabricated from over four-thousand pounds of fiberglass and concrete. Set (without pedestal) on the bare dirt in Southern California’s shrubby chaparral and conceived loosely as a free-form social space (in contrast to its tight, technical and technological origin point for the piece), the series of shelters inspired a range of programmatic and artistic responses exceeding anything initially planned, subsequently playing host to performances, readings, classes, dances, and concerts.

Upon reflection, one might read House of Dust through the lens of dematerialisation in order to celebrate its early and novel embrace of information systems in lieu of considerations of form, format, and materiality grounded in a single, fixed art object. On the other hand, this reading might be somewhat incongruent to a contemporary audience; computers – like sculptures, paintings, or books – are material systems. One might be compelled to find inspiration not in what is lost, but in what is gained, in circuitous translations and its attendant trans-operations across fields such as history (transformation or change), gender/sexuality (transgender, transsexuality or transidentification), and culture (transnational).(→ 2) Materialised in many different forms—from the paper slip to the computer chip, from the dot matrix print out to the architectural installation build out – the House of Dust draws a line at dematerialisation; instead, deriving its generative potential through catalysing collaboration in an excess of disciplines (transdisciplinarity) and transcending any given materiality (transmateriality).

Transitioning to the work of our architectural practice, Roundhouse Platform, we are fortunate to operate in a historical moment where we can take for granted rematerialisation and the nearly infinite possibilities of iteration that can be generated by the computer. For example, in a recent project entitled Aggregate Hab (2020), a collaboration with design-build firm i/thee, we’ve used computational scripting to code a generative grammar of ground forms and materialise them through a process of automated robotic digging in a sandbox as a formwork for analogue, hand-applied papier-mâché. In the modelling process, the negative form of the hole becomes the positive form of the paper shell and both reunite to create a semi-subterranean shelter with rich, earthen textural and spatial qualities extracted from the site itself. From this process of constructing a dialogue between script, sand, paper and robotic arm, a large series of possibilities was created and, after evaluation, one form was selected to be built as a prototypical shelter at a larger, occupiable scale. The built form, constructed near Ant Farm’s Cadillac Ranch (1974) and Smithson & Holt’s Amarillo Ramp (1973) in a remote location on the tablelands of Far West Texas, functions at the interstice of land-art and architecture. It is a rematerialisation of the initial dialogue this time built in paper-mâché and dirt and at the architecture scale. After building we returned to coding, continuing the human-computer dialogue, hoping to make a step toward closing the loop. We created a code, inspired by the poetry of Alison Knowles and using the internet and open source participation to compile new poems. From the code to the building and back, we explore using open-source coding to broaden the dialogue through a larger set of interlocutors. Based on computed dialogues, the physical form of Aggregate Habitat inspired an open-ended system for conceptualisation and collaborative poetry spanning dematerialisation, rematerialisation and transmaterialisation. 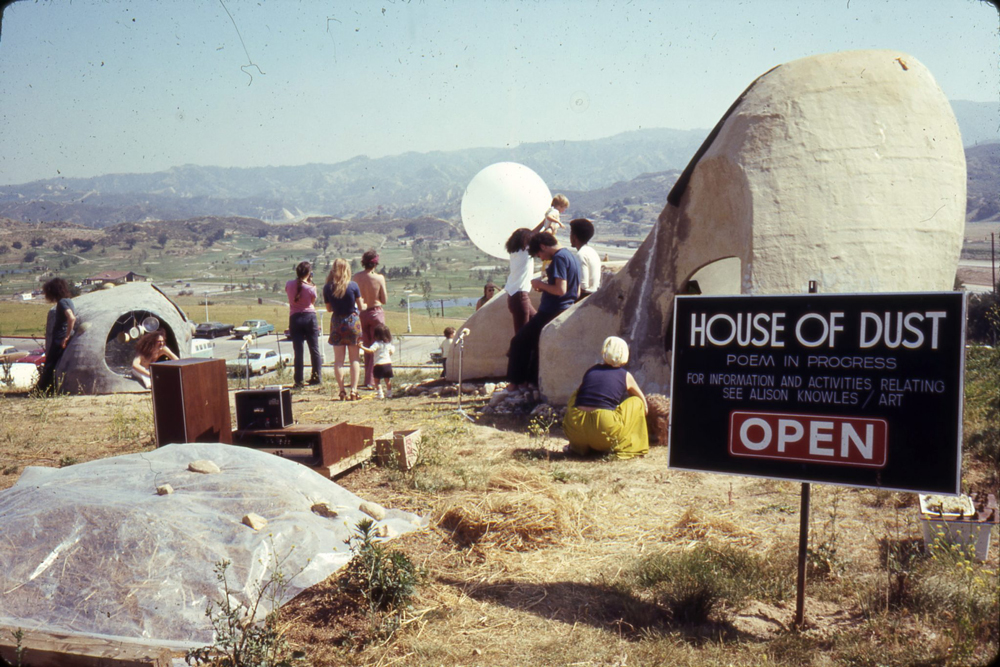 Inside Drop City
From the BBC documentary “Towards Tomorrow: A Utopia”

Echoing the “Groundworks” timeline: 1951
explorations
#groundworks
Excerpts from a Work in Progress