In collaboration with Giulia Bruno
and Giuseppe Ielasi.

From Aquaria – Or the Illusion of a Boxed Sea

Filmed entirely inside the Oceanário de Lisboa and its backstage and commissioned especially for the exhibition, the film leads the audience through the various environments, operational codes, research departments, technical maintenance sectors, sophisticated climatic control systems, relationships and coexistence with marine creatures. The artist’s backstage observation comes across as meticulous as the fine-tuning of management activities that take place on a daily basis within the Oceanarium, in a dimension hidden from the public, and of which an emotional, multi-sensorial tour is offered on the other side of the glass wall.

The complexity of the architecture is seen as a multiple interface that orchestrates a variety of models, like a laboratory in which to recreate specific climatic and behavioural conditions. It is a sort of operations room where control is tested in order to anticipate variables and to avoid chaos, as well as a baroque opera theatre staging living habitats where the different hemispheres and living creatures are “compressed” together. 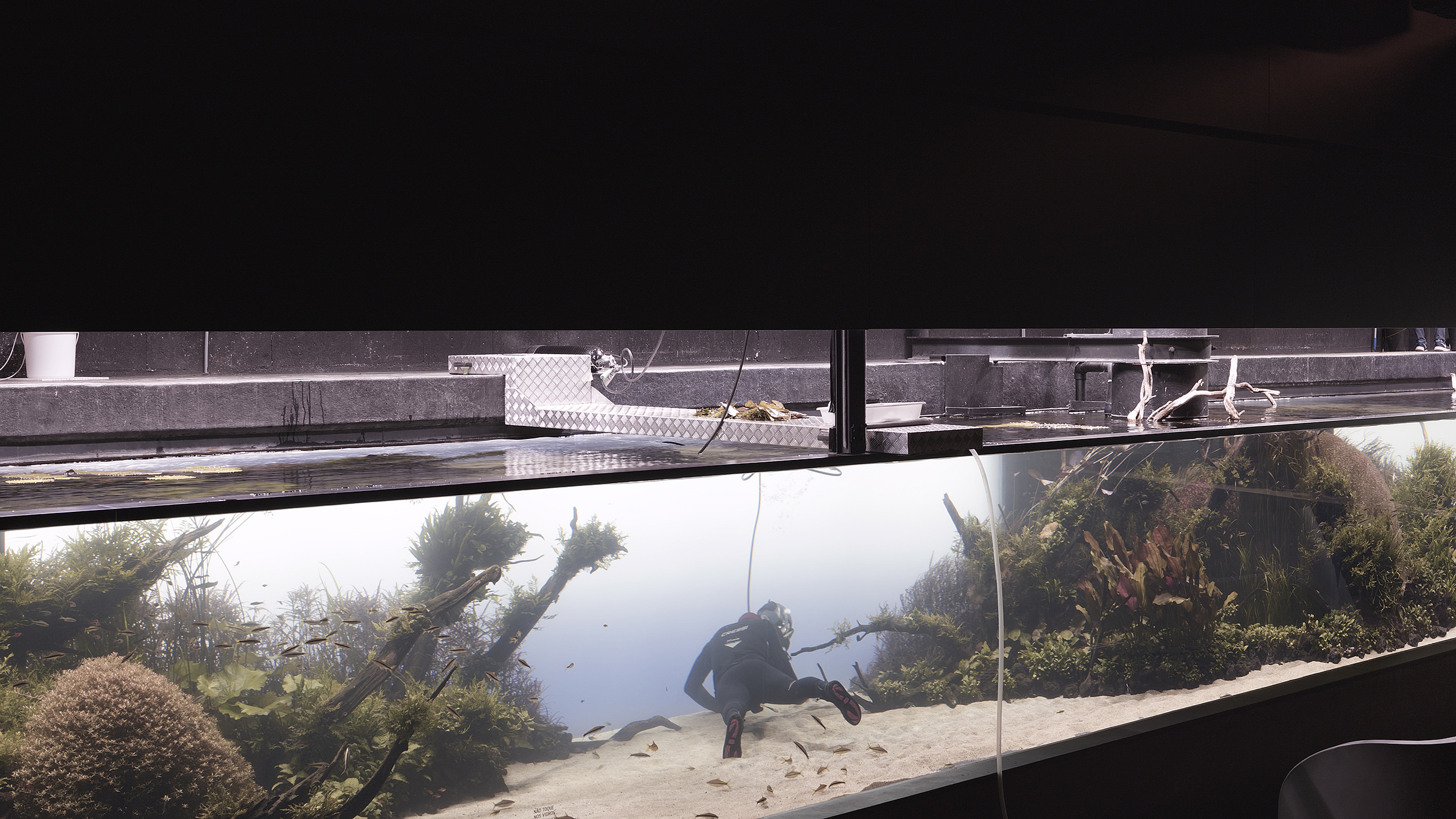 Oceanarium (2021) was commissioned by maat and EDP Foundation, in association with the Oceanário de Lisboa. The film features the collaboration of Giulia Bruno (camera, editing) and Giuseppe Ielasi (sound, editing).

The artwork was commissioned by maat and EDP Foundation on the occasion of this exhibition. The film has been realised with the scientific collaboration and support of Oceanário de Lisboa and Oceano Azul Foundation. Filmed at the Oceanário de Lisboa from 7 to 18 September 2020. Armin Linke would like to thank maat / EDP Foundation, in particular Beatrice Leanza, Rita Marques, Matilde Azevedo Neves, Andrea Dionísio, Bárbara Serôdio, Elisabete Sá and Nuno Fernandes Paula, Oceanário de Lisboa and all its team. With special thanks from the artist to Angela Rui, Peter Chermayeff, Sam Chermayeff, Takashi Amano, Aqua Design Amano and Filipa César.

At maat, the presentation of Oceanarium includes another video, an interview with Peter Chermayeff, the American architect who designed the Oceanário de Lisboa and is considered to be one of the world’s leading experts on aquarium architecture. 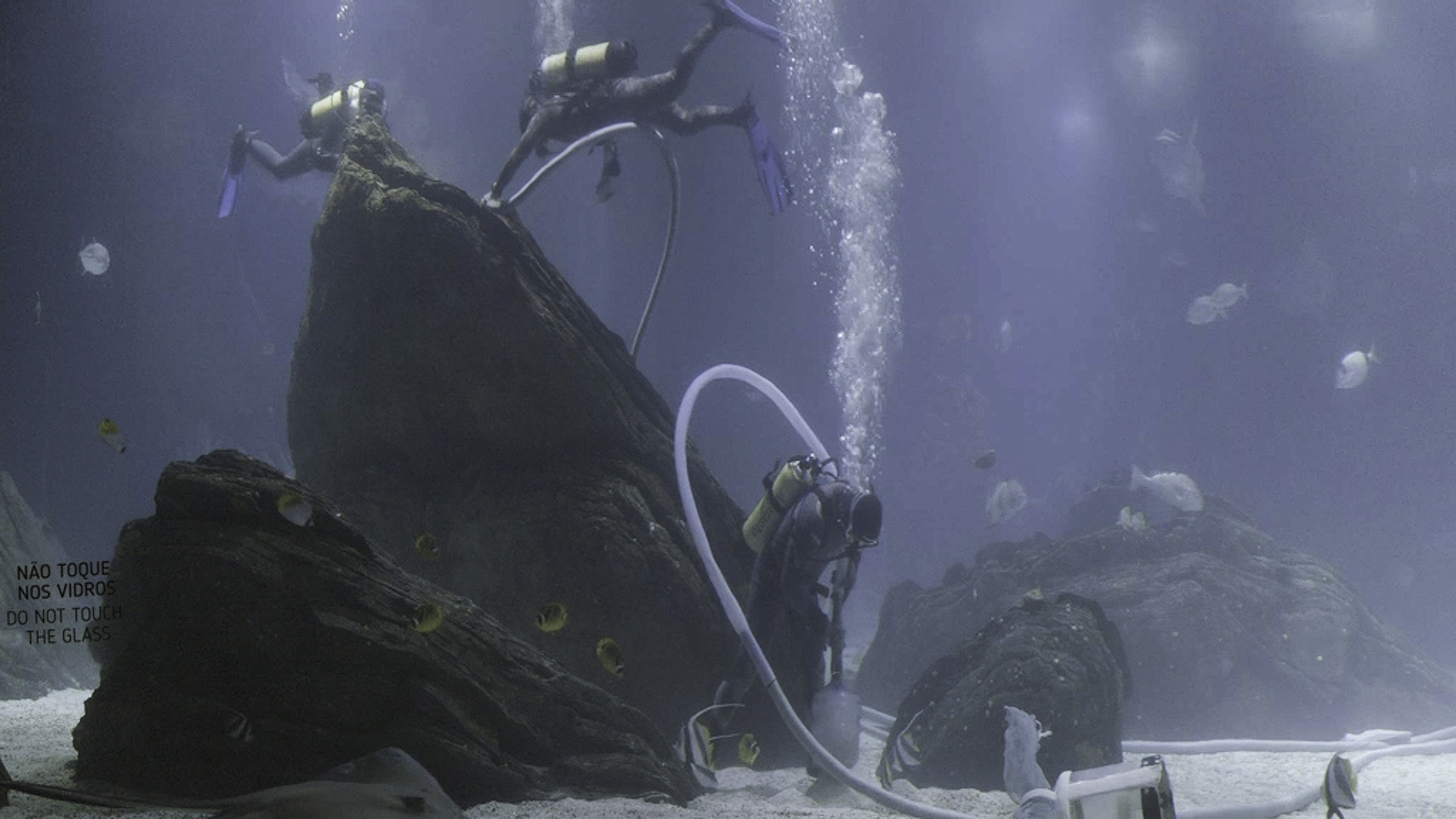 The aquarium is somehow a model for a life system, but it is also an archive and an exhibition where different lifeforms are “curated"; it shows how a biological habitat and coexistence among species embed sophisticated negotiations.

I often had to think at the exercises I photographed in Star City near Moscow, where the MIR space station cosmonauts practised living in a closed habitat (a replica of the spaceship) for long periods, and experimented with the absence of gravity in a swimming pool to simulate how to repair the outer shell. What we filmed at the Oceanário de Lisboa can be compared to that sophisticated, artificial replica of nature, but it is also related to the observation of a “modern” narrative around the notions of progress and knowledge. Thinking about media reportage, we often focus only on astronauts’ experience, but behind that image, on earth, there is an extraordinary staff working behind the scenes. This is why, at the beginning of the film, we mostly show these procedures that in fact are very similar to the safety checklists and maintenance procedures in aeronautics, or in scientific and especially in medical laboratories, where you need to be sure to avoid any kind of variable. We wanted to show that paper checklists, Excel tables, monitoring and automation control software interfaces allow the system to survive.

The system is so fragile that a very precise routine must be set up because if just one parameter goes out of control, it triggers a chain of instabilities that brings that system into chaos. Like the climate tipping point of 1.5 degrees proposed by Will Steffen for the global climate, or the control of contamination in a surgical operation room. 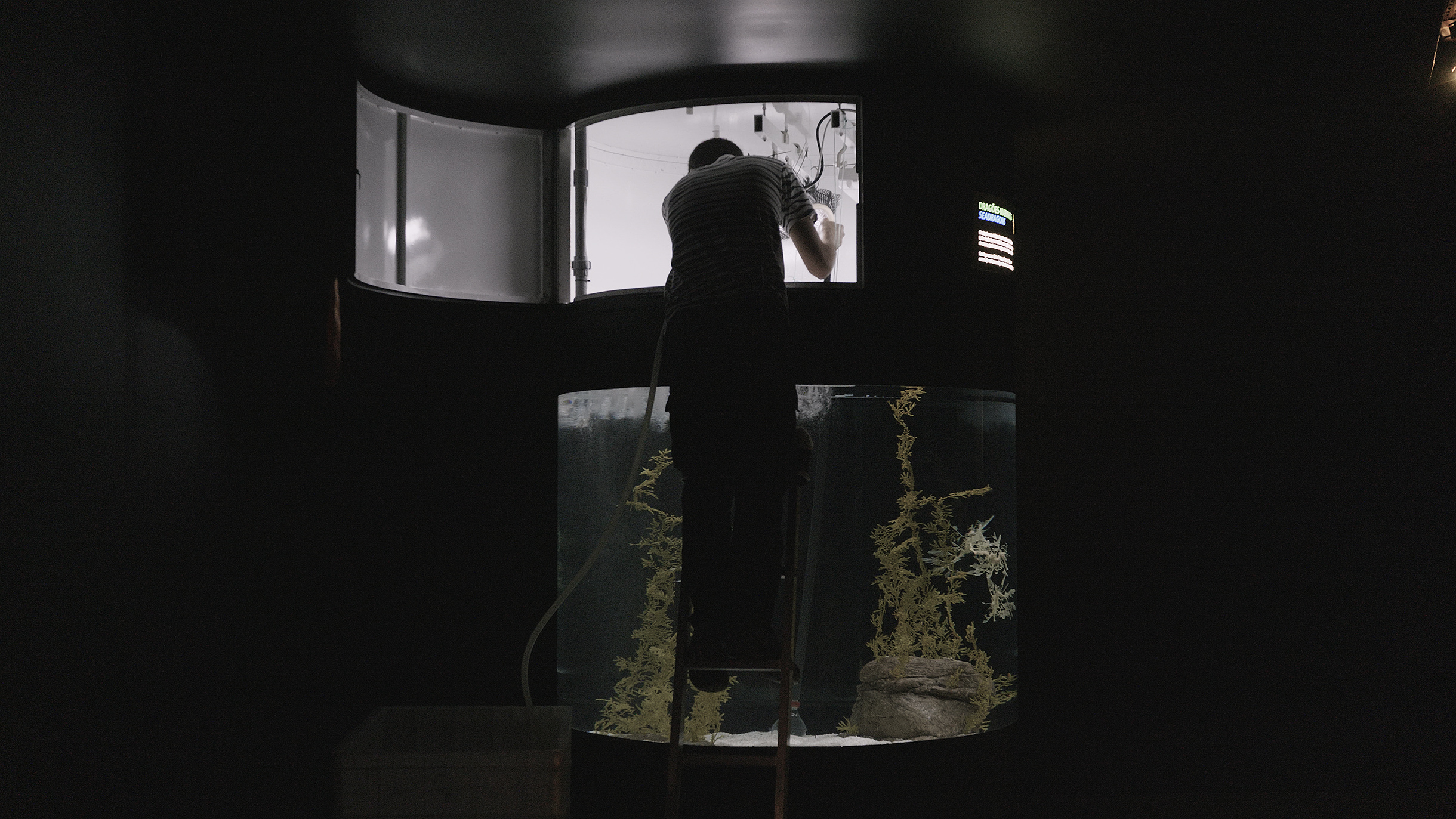 The aquarium is somehow a model for a life system, but it is also an archive and an exhibition where different lifeforms are “curated"...

Nevertheless, the main goal is always the preservation of the fish: as living beings (the aquarium has its own kitchen where each fish gets prepared its own “menu” and most of the fish get a personal feeding procedure), as part of the “collection capital” (all aquariums and zoos of the world are interconnected by a specific archive software that allows species exchanges) and as a single variable that can bring disorder into the overall system. 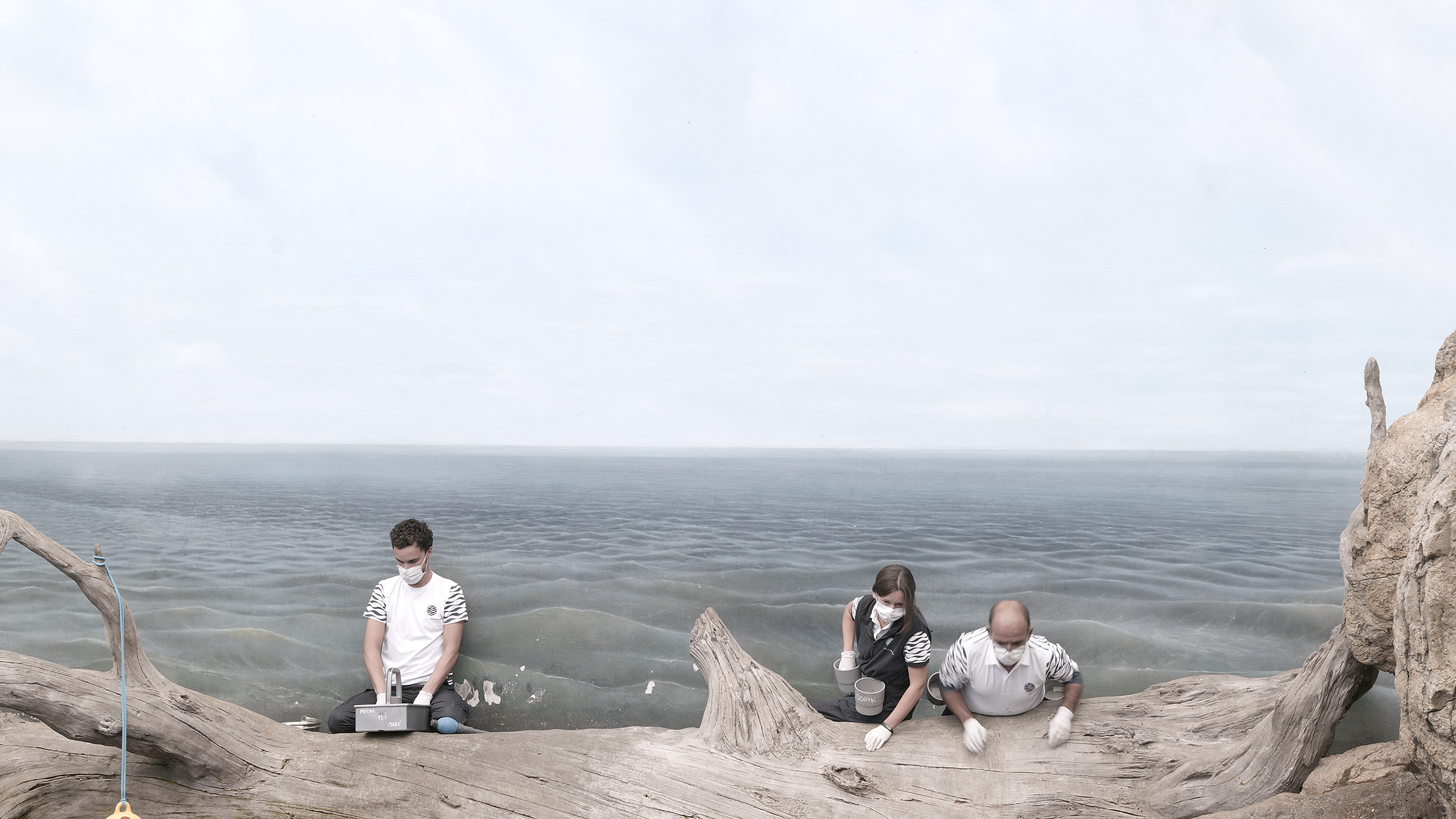 The aquarium is therefore somehow a combination of a laboratory, where you recreate specific conditions always with the same scheme, a Cold War operations room, where it is necessary to prevent and anticipate variables, and a baroque theatre opera, repeating specific scripts, which in this case are living habitats, held together in a world expo where the different hemispheres and living forms are “compressed” together. I like the model of the opera house: at the oceanarium, the public can look at the main tank from two levels, as happens in theatre, from the stalls or from higher up in the gallery. The main tank is surrounded by four different “climatic tanks” that together construct a five-act narrative like in an opera libretto. Moving on to different habitats, you also hear different soundtracks from loudspeakers and feel the different temperatures… it is a multi-sensorial environment, a kind of Wagnerian Gesamtkunstwerk. But you always look through this acrylic window exactly how you look at the plastic acrylic computer monitors of your computer, where pixels generate images that you can understand. This is also why the last screen we see in the film is a computer screen.

Armin Linke is internationally known for an oeuvre which includes photography and film that take an in-depth, multidisciplinary look at our culture of technology and scientific progress to analyse the transformation of the environment.

“maat Explorations” is an ongoing programme that delves into the socio-cultural and environmental transformations concerning the current bio crisis and ecological destruction, providing insight into the hard science of climate intervention and the creative speculations behind innovation-led research to safeguard our planetary co-existence.

The exhibition Aquaria – Or the Illusion of a Boxed Sea (maat, 18/03 – 06/09/2021) reflects on the possibilities and new questions that arise when rethinking our relationship with the marine world. Curated by Angela Rui, the exhibition path unfolds through 11 installations offering different points of view to emphasise how the ways of understanding the marine environment were once conceived and how they should be reconsidered today.

Angela Rui
From Aquaria
explorations
#aquaria
#morethanhumanecologies
MAAT.PT
AQUARIA — ​​​​​​​Or the Illusion of a Boxed Sea