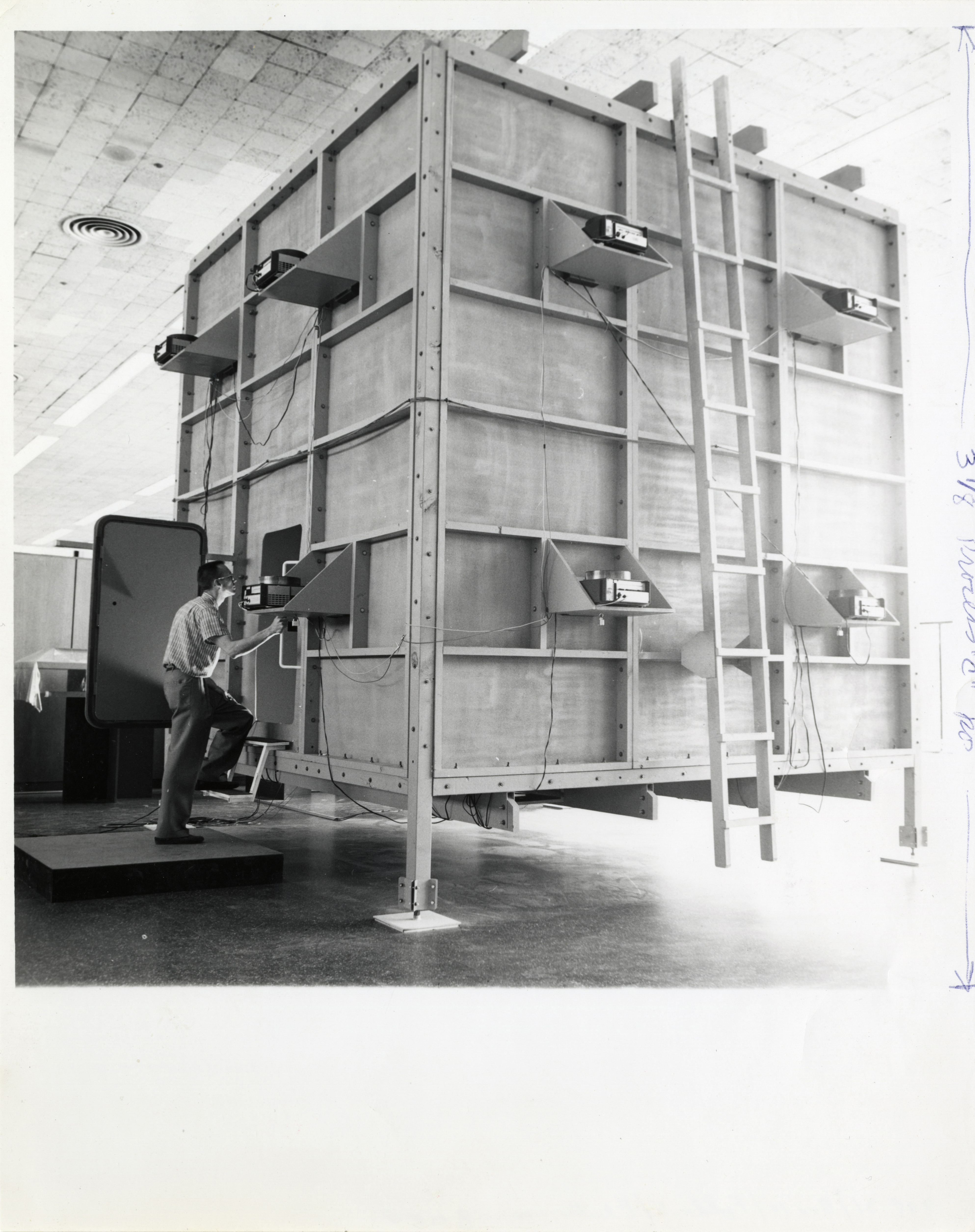 “Our aim here, partly, was to create a totally new, totally strange, even seemingly hostile environment. … Here, all alone, a student is placed in an environment completely outside of his normal experience range and is exposed to rapidly presented information in an intense and exciting atmosphere. (→ 6)

These new environments are fabricated of information, and structured so that the student becomes the agent of synthesis rather than the hitchhiker the lecture system made of him. The amount of information input is increased many times beyond the capability of previous systems, and is made available in terms [that] allow the intellectual leverage which grows from opportunities for juxtaposition. It is by comparing that we learn. (→ 7)

“The highly individual practice of American architect and designer Ken Isaacs (born 1927, Peoria, Illinois) challenged conventional definitions of modernism through designs that sought radical solutions to the spatial and environmental challenges of modern life. Fuelled by the optimism that defined the post-war period, Isaacs began working with the new forms and technologies offered by modernism and advances in science, at the same time shunning the consumer-laden values of the American dream. The result was a lifelong commitment to a populist form of architecture that, because of its low cost and ease of construction, allowed a broad range of publics to participate in the design process.

These designs, all founded on Isaacs’s concept of the matrix or total environment, were built using a three-dimensional grid and took the form of modular units called Living Structures that unified the multiple functions of furniture and home, including nomadic, sustainable architectural dwellings or Microhouses. Isaacs also applied his matrix idea to various multimedia information systems, most notably The Knowledge Box (1962), which was re-created by Isaacs in 2009, an experimental learning chamber that eschewed the traditional classroom for ‘environmental’ concepts of education.

An early apprenticeship in mechanical engineering combined with studies in cultural anthropology and information theory shaped Isaacs’s early interest in architecture and design. He developed his Matrix Research Project while a graduate student at Cranbrook Academy of Art in the early 1950s, where he also created his first Living Structure (1954) and later taught his Matrix Study Course. Isaacs also held academic positions at the Rhode Island School of Design and the Institute of Design, Illinois Institute of Technology, Chicago, where the original Knowledge Box was constructed.” 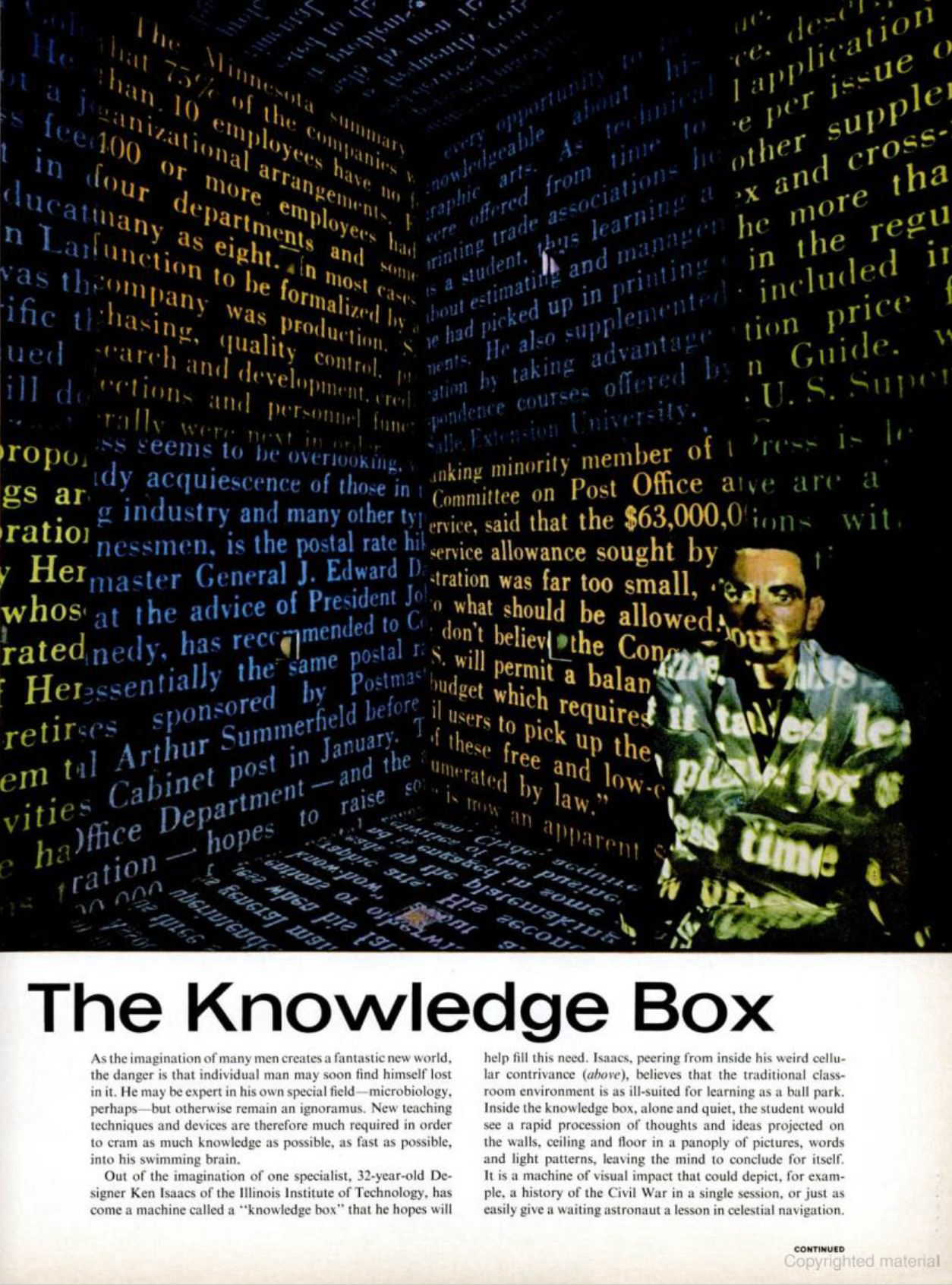 “As the imagination of many men creates a fantastic new world, the danger is that individual man may soon find himself lost in it. He may be expert in his own special field – microbiology, perhaps – but otherwise remains an ignoramus. New teaching techniques and devices are therefore much required in order to cram as much knowledge as possible, as fast as possible, into his swimming brain.

Out of the imagination of one specialist, 32-year-old designer Ken Isaacs of the Illinois Institute of Technology, has come a machine called a “knowledge box” that he hopes will help fill this need. Isaacs, peering from inside his weird cellular contrivance (above), believes that the traditional classroom environment is as ill-suited for learning as a ball park. Inside the knowledge box, alone and quiet, the student would see a rapid procession of thoughts and ideas projected on walls, ceilings and floor in a panoply of pictures, words and light patterns, leaving the mid to conclude for itself. It is a machine of visual impact that could depict, for example, a history of the Civil War in a single session, or just as easily give a waiting astronaut a lesson in celestial navigation.

From the outside the box has an almost foreboding appearance, like a cage made of empty library shelves. Built of Masonite boards bolted to a wood frame, it lets in no light except that from the 24 slide projectors mounted on the outside and controlled by a central switch. In actual operation the box would confine itself to a single subject and its related aspects, flashing a series of pictures, words and designs which would ‘teach’ a viewer through a flood of images. Isaacs considers the machine a crude forerunner of a whole new approach to education.

Inside Ken Isaacs’ ‘knowledge box’ the first thing you think is it’s the darkest place you’ve ever been. Then, without warning, you find yourself hemmed in by maps. They’re everywhere – on the walls, the ceiling, the floor. You look down to see what country you’re standing in.

But before you can even read the shape, it’s gone. The maps are replaced by numbers – big ones, little ones, single digits the size of a man. And then, in small pink letters, the word “sale” dangles itself in mid-air. Suddenly you are immersed in gold coins, and the thought flashes through your mind that whatever that sale was, it was a success.

Ken Isaacs, the Matrix and the Establishment of the Quintessentially Modern
Susan Snodgrass on Ken Isaacs and his Knowledge Box

Echoing the Groundworks timeline and the Visual Natures mapping: 1962